Much has been written, about the events that took place at the Vailsburg Motordrome board track in Newark, New Jersey on September 8, 1912, and later at the Lagoon Motordrome in Ludlow, Kentucky on July 30, 1913. As racers prepared for these two events, no one could expect the tragedies about to unfold. The two tragic events, lead to the eventual end of Motordrome racing. My intention in telling this story, is not a rehash of the events of those days, but show how the press covered the events, and how that coverage changed early racing.

In July 1912, famed board track builder Jack Prince completed his latest venue, the Vailsburg Motordrome, outside Newark, New Jersey. This track was located only about 20 miles from the recently opened Brighton Beach Motordrome. Prince had some of his best riders in country under contract racing at Brighton Beach. They would now have a second track to race on, which was also in the New York City market.

Vailsburg was the latest of the circular board tracks, often referred to as "Saucer Tracks". This was due to the fact their steeply banked circular design looked like a large saucer. These tracks allowed the racing motorcycles of the day to reach speed of close to 90 miles per hour. They also allowed the spectators, who were seated in grandstands above the top of the racing surface, to get a close up look at the action. Fans often stood along the railings to watch the riders, who flew past at break neck speed just a few feet from the crowds of spectators.

The Vailsburg Motordrome opened with a full program of motorcycle racing on July 4, 1912. The event drew a crowd of 8000 spectators.  Newark Mayor Jacob Haussling fired a starters pistol to start the first race. Freddie West of San Francisco won the first professional race held at Vailsburg. 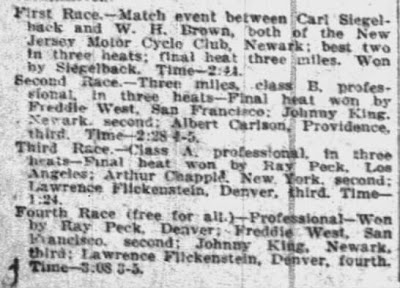 The July 5th New York Times Sports Page also reported the crash of Brooklyn Rider Freddie Mercer, in the final race of the day at the nearby Brighton Beach Motordrome on July 4th. This was the first serious crash at the newly opened track. Mercer broke several bones, but had no life threatening injuries.

On July 14th, the sports page of the New York Times featured an article on a race at Vailsburg under the headline " CONSTANT BREAKS RECORD". The article detailed the days races and the new track record set by J.U. Constant in the one mile exhibition.  The article refers to the Vailsburg track as a "four lap" track", meaning the track was 1/4 of a mile in length, and required four laps to complete a one mile run. Constant's completed the mile run in just 46 seconds, giving him an overall speed of 78.26 miles per hour.

The races returned to Vailsburg, on Sunday September 8th. At about 5 PM, the riders took to the track for the five mile race. As the race began, Eddie "The Texas Cyclone" Hasha on an Indian, was leading fellow Indian rider Ray Seymore. Hasha's bike developed a miss fire, and Seymore took the lead. Hasha made an adjustment to his carburetor, and he re-enterd the race at the top of the race track. Hasha's bike suddenly took a sharp turn crossing the black warning line at the top of the racing surface. Hasha traveled about a hundred feet along the three foot spectator railing at the top of the track, striking the heads of numerous spectators. He then struck a large roof post and was hurled into the spectator seating area. Hasha's bike slid down the banking into the path of fellow rider John Albright, who was thrown from his bike.

When the dust cleared, Hasha was dead of a broken neck, Albright was seriously injured, and five spectators were either dead or dying. The crash, and resulting carnage, caused a spectator stampede out of the grandstands, injuring numerous spectators. Albright died of his injuries later that day. The final death toll from the horrific crash was eight, which included Hasha, and Albright, along with six spectators. Three of the dead, were young boys twelve to fourteen years old.

There is a phrase in modern television journalism, "if it bleeds, it leads," meaning viewers are drawn to human tragedy. This is not a new phenomena, as the newspapers of the the early nineteen hundreds often used sensational headlines to attract readers to their newspapers. By the time of the Newark accident, there had been several deaths of both riders , and spectators, at motordromes around the country. The Newark accident was taylor made for this type story. No less than the New York Times had an article on the crash on their front page.

In the next few days, and weeks, headlines, articles, and diagrams detailing the crash appeared in newspapers across the country.


On September 10th, articles began to appear in newspapers across the country identifying the victims of the Vailsburg accident.

This September 10th article in the Washington Post also mentions the death of rider Curtis Edwards at the Riverview Motordrome in Chicago and September 9th. The wives of Eddie Hasha, and Johnny Albright, had both witnessed their husband's fatal accidents. They now claimed their husband's bodies, and returned with them to their home states for burial. The article also makes mention that a previously scheduled race at Vailsburg the following Sunday "will be prohibited."

On September 14th, the Newark's Mayor Haussling banned further motorcycle races from taking place at Vailsburg. This was a mere two months since he fired the starter piton for the first race held at the motordrome.

On September 17th, articles appeared in newspapers around the country detailing safety changes being made Motordromes. This appears to have been an attempt Motordrome operators to head off a similar racing bans in other cities. The articles stated the safety changes were being made to all current motordromes throughout the country. It also stated any new motordromes built, would include the listed safety changes. While several other cities banned motorcycle racing at their motordromes, it appears the changes avoided a feared national motodrome racing ban.

The owners of the Vailsburg Motordrome, attempted to skirt the motorcycle racing ban, by scheduling a "Motorcycle Exhibition" featuring single riders lapping the tack alone. The event was to take place as part of an event featuring foot races. They made it clear there would be no racing, but the Newark Chief of Police Corbitt threatened to aresst the owners, and the exhibition was cancelled.

In addition to the closing of the Vailsburg Motordrome, the owners also faced criminal  charges. On October 26, 1912, a grand jury cleared the the motordrome owners of criminal negligence in the Vailsburg accident. The owners still faced several civil suits stemming from the accident.

The Motordrome was used for other events, including a marathon foot race featuring Finnish Olympic running star W. L. Kolhemainen, who set a new World Marathon Record during the event.

While well attended, these events did not produce the revenue necessary to keep the tack operating, and it was closed. The Valisburg Motordrome was sold at a Sheriffs Sale for $9,500. in November 1912, to satisfy an outstanding judgment held by the carpentry firm, which built the facility.

With the closing of the Vailsburg Motordrome, the controversy surrounding Motordrome racing did not end. In December 1912, an article titled "PUBLIC LIKES TO SEE RIDERS KILLED" appeared in several newspapers.

In January 1914, the civil claims for four spectators injured in the Vailsburg accident were settled for just $328. The Motordrome was heavily damaged by fire in January 1915. It was later torn down to build Vailsburg Park. 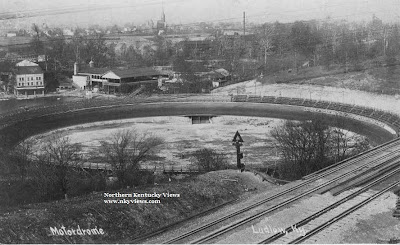 The Lagoon Motordrome was built just across the river from Cincinnati, Ohio, in Ludlow, Kentucky. The one quarter mile circular board track was similar in design to the Vailsburg track, and was opened in June of 1913.

Less than a year after the Vailsburg accident, tragedy struck again at the Lagoon Motordrome. On July 30, 1913,  rider Oden Johnson of Salt Lake City, was running high up on the track, when he hit a light pole. The crash snapped off the pole, and the loose wires ignited Johnson's fuel tank. Johnson's lifeless body landed in the spectator seating area, along with what was left of his motorcycle, killing a spectator. Burning gasoline sprayed over a large crowd, which again set off a stampede of spectators trying to escape the burning fuel.


In the ensuing chaos, it took police almost an hour to get control of the scene, and for rescue workers to reach all the victims. A total of eight people died in the next few days, from injuries and burns incurred the accident. Once again, newspaper headlines reported the injuries and deaths in great detail.


Newspapers also began to again print lists of all the recent Motordrome fatalities across the country.

And like in the Vailsburg accident, the Lagoon Motordrome management faced criminal charges, and civil law suits.

A jury cleared the Motordrome manger of wrong doing in the Lagoon accident in December 1913. The jury found Oden Johnson, caused the accident, by riding high up on the track, and striking a light pole.


Remarkably, despite the serious injuries, and deaths, those who pushed to close the Lagoon Motordrome were unsuccessful.

The track reopened, and continued to hold races for through July 1915.

The Lagoon Motordrome was heavily damaged by a tornado that struck Ludlow, Kentucky on July 7, 1915. It was rebuilt in just 30 days, and racing was resumed.

The Motordrome was rebuilt in just 30 days, and racing was resumed.

At the end of the 1915 racing season, the Lagoon Motordrome was converted to a Baseball Park. The Park remained open for several more years, but was closed with America's entry into World War 1.


I find it interesting, that these two tragic accidents, ended differently. Both events had similar numbers of fatalities, and were covered by newspapers around the country with sensational headlines. As a result of the bad publicity, the managers of both facilities were criminally charged, only to be cleared by juries later.

The local authorities in Newark closed the Vailsburg Motordrome almost immediately, and it never reopened for racing. One would think that the second such large loss of life in a year would have certainly doomed the Lagoon Motordrome to the same fate. Not only did Lagoon survive the tragic events of July 30th, it continued to hold successful Motordrome racing for five more years.

Motordrome racing met a slow death after the Vailsburg, and Ludlow tragedies. Beginning in the later teens, longer oval board tracks, with banked corners, and flatter straightaways, were built. These oval tracks moved the spectator seating along the flatter straightaways. This change dramatically reduced spectator injuries, and deaths, as it tended to prevent motorcycles from flying into the spectator seating areas.

It was not until July of 1919, that the Motorcycle and Allied trades Association (M.A.T. A.) refused to sanction professional races on the circular board tracks under one mile.

In the end, these larger oval board tracks were eventually abandoned in favor of dirt oval tracks.  The cost of building, and maintaining board tracks, along with the threat of fire, and lack in insurance just made them just too financially risky.

There is still a chance to experience some of the thrills of early Saucer Track motorcycle racing today, in the form of the Wall of Death Motorcycle Thrill Shows.

David L. Morrill is a freelance writer, and early motorcycle racing historian, who divides his time between Ocala, Florida and Sylacauga, Alabama. David has consulted with the staff at the Barber Vintage Motorsports Museum, and his articles have appeared in American Iron and Full Throttle Magazines, The Barber Museum's Vintage Insider News, and on The Vintagent and Birmingham History Center Blogs. 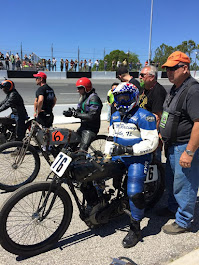